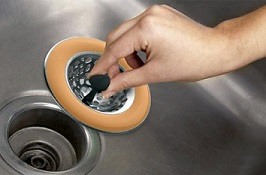 Common Plumbing blockages are caused by a gradual build up of particles.

Plumbing Common blockages can be a problem that goes unnoticed for some time until it gets so bad that there is no longer any movement of water. After having a bath or a shower and the water released takes longer than usual to drain away this is caused by a gradual build-up of particles restricting the flow through the waste pipe.

The best way to try to eliminate this problem from occurring is not to allowing large particles to be washed away down the plughole. A build-up of hair trapped beneath the plughole is often the cause of blockages in baths and showers. This will increase the possibility of other particles building up and making the blockage even worse.

Soap is another common cause of plumbing Common blockage, large partials that have not dissolved and are trapped in the pipework beneath the bath creating a build-up of wastewater which is unable to flow freely due to the blockage. Some blockages of this type can easily be removed by creating a vacuum using a plunger forcing pressure to the affected area and removing the blockage. If this approach is unsuccessful it may require the removal of the bath or shower trap to inspect and possibly remove any foreign objects trapped which may be causing the blockage.

Another Common plumbing blockage problem that is often found would be the toilet. Toilets can be a lot more serious than one in a bath or a shower, other problems stem from blockages in toilets that make this type of problem more urgent. The pipework for a bath or shower is considerably smaller than that of a toilet, so whatever may be the cause of the blockage would have to be a much larger object. Common Plumbing blockages in toilets are often due to trying to flush materials down the toilet which it was not designed for, or overloading the system and creating a blockage. The best way of dealing with this type of problem is not to repeat flushing if the water level is rising, this may create overflow leading to all types of other problems. Toilet blockages may be best left to a professorial who is equipt to deal with any hygiene issue that may occur due to the blockage which may require special equipment to restore the flow to the system.

Common Plumbing blockages in sinks are very similar to baths and showers the only difference being materials which cause the blockages. The trap beneath the sink can sometimes become blocked and may require removal to inspect and possibly remove any foreign objects trapped, which is usually food-related. Prevention, some sinks can be fitted with a strainer which fits into the plug hole trapping objects which would of otherwise gone down the sink.

There are various produces on the market that can assist in removing blockages, some of these liquids may contain corrosives such as caustic soda. Its is always best to thoroughly read the product instructions before using any bath plughole unblocks to ensure suitability for the job.