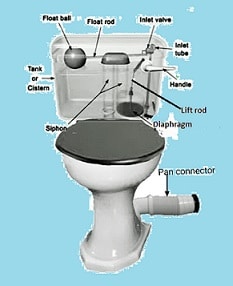 Although Toilets come in a wide variation in their various designs, the general operation of each toilet will always remain the same.  Common problems found with toilets can easily be identified firstly by understanding the operational sequence of a toilet.   The inner mechanism of a toilet cistern works on three basic principles, the mechanics of the inlet valve, syphon and the incoming water supply.  A combination of the three is required to trigger a toilets sequence of operation.

What can go wrong with the toilet inlet valve?

After a toilet as been flushed the cistern will need to be replenished with a fresh supply of water.  However, the incoming water supply will be relentless in its continual flow if the inlet valve is faulty.  A common sign to look out for when a problem like this occurs is the constant sound of running water.

Toilets have been designed to overcome the possibility of flooding in the advent of an inlet valve failure.  A problem like this can be easily identified on the older types of toilets by the overflow leaking water to the outside.  In comparison,  a more up to date version of this process would be an internal overflow directed into the toilet pan.  A cost effective and straightforward solution to a problem like this would be the removal and replace of the faulty inlet valve.

All float valves operate on the same basic principle.

Similar to a toilet cistern is the source of the water supply to a central heating system found in the loft in some properties. Whenever water is drawn off the valve opens replenishing the supply, this sequence is automatic whenever the valve is activated due to a drop in the water level. The incoming water is shut off after the water tank assumes its previous level.

Problems associated with this type of valve is the failure to recognise a rise in water level, at this point the valve will need to be replaced. Similar to the safety mechanism fitted to a toilet, the overflow of water through the warning pipe will signify valve failure.

After many years of repeated use a handle operated flush can become faulty.   A handle flush cistern works by leverage its connected inside the cistern via at metal lift rod that is constantly submerged beneath the cistern water, corrosion wear and tear or just metal fatigue could lead to its failure. Every time the handle flush is operated a leverage force is exerted through a rod pulling the syphon,  this, in turn, releases the cistern water.

Some push button syphons, unlike the handle type, can be operated by air pressure.  Push button syphons come in two variations in their designs lever or and air operated. Button operated syphons are usually situated at the top of the cistern; a faulty button can easily be replaced.  However, it is important that a replacement button matches up with the syphon.  An air operated syphon will not be comparable with the lever type of button.  In instances such as this, a complete replacement of both syphon and button will be required successfully carry out a toilet repair.

A toilet syphon can lose the ability to release or retain the water continued within the cistern.  After the cistern as refilled itself proceeding a flush,  a good sign that a syphon is letting by is the constant dripping of water.  Some models of syphons can be repaired simply by replacing the diagram; a plumber may decide on a complete syphon replacement to eliminate the possibility of future syphon problems.

Leak at the back of a toilet

After a toilet has been flushed a protective layer of water will remain in the pan, the pan connector is fitted with a rubber seal to prevent leakage, after a flush.  Over a period, the rubber seals can lose the ability to contain leakage.  A problem like this can usually be resolved with the application of silicone.  However, in the case of a server leak to a pan connector,  a replacement will be required.

Difficulties faced when carrying this type toilet repairs are rusted or worn screws, vanity units, and toilets built into a concealed compartments.  Experienced plumbers with the expertise can overcome these types of problems that usually come as part of the job.

One thought on “Common problems with toilets”