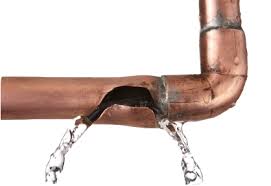 We have found that One of the most common reasons for emergency burst pipe repair is due to cold weather. freezing and flocculating temperatures can affect exposed pipework both internally and externally. Garden taps are a prime candidate for these types of problems properly insulated pipework has far much less chance of freezing but this is only one measure, Other measures can be taken to protect pipe installed in parts of buildings exposed to cold temperatures. Most modern boilers have a built in mechanism which kicks in when a boiler scenes temperature dropping too low which may affect pipework leading to an emergency burst pipe repair, however for those that do not have this facilitate a similar process called a trace heater can be used on pipework to protected against freezing. Trace heaters Sense when a pipe is in danger of freezing and sends the required amount of heat needed to stop pipes from freezing.

Another common emergency burst pipe repair is pipework damage when DIY repairs are carried out. The Dyer unknowingly puncturing pipework either below floor boards or within walls. Emergency burst pipe repairs in walls are far more difficult to deal with than those below floor boards. For most plumbers letting floor boards is a standard procedure used when installing or repairing central heating pipework,however damaged pipework within a wall is a very costly and time consuming proceedure due to the location and the amount of digging to locate the burst pipe. The best way of avoiding these types of emergency situations is not to screw or drive nails into areas without knowing what’s there an experienced plumber will have the necessary equipment to detected any potential problems.

In normal circumstances pipe work failure really occurs, and when it does it is usually at a failed joint. If plumbing work has recently been carried out and failure occurs shortly afterwards then there’s a good chance that one of the joints may not of been closed correctly leading to pipework failure. This type of leak is not a burst pipe its a joint failure which brings it’s own problems it can either cause an emergency situation were you see rapid water flow or the dreaded slow drip were over time it rots your wooden joints and weakins your ceiling , if its a slow drip look out for damp patches on your ceiling and damp carpets. Emergency burst pipe repair would be the first assumption by most plumbers attending an emergency of this type, until an inspection was carried out to find the cause of the problem.