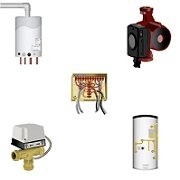 The origin of modern heating systems

Heating systems have been around for a very long time;  archaeologist have discovered that the Romans used convection currents to distribute warm air throughout buildings.  The Romans learned through experimentation how they could use what would be considered cutting edge ideas to harness the power generated by a furnace to circulate heat around a building.  They used furnishes at the lowest level of building deep beneath the flooring to create warm air.   The natural rising convection currents of warm air would then circulate the heat under the floors and around the building.   These methods of heating were effective and are the blueprint that inspired some of the innovative technology integrated into a  modern central heating system.  The basic principle of the central heating system is to generate heating at a central point and then to circulate.  The word central heating refers to fuel used to generated  heat at a central point, by then adding circulation propulsion the heat will then circulate a building creating evenly balanced temperature.

The circulation of heat has changed since the Roman first experimented with the idea.  There is a natural transference of heat through water called convection.  However on a modern heating system convection alone is not enough to remove the high temperatures generated by a boiler.  A central heating pump can quickly get the heat generated at the boiler to radiators.

Improvements in central heating technology have now taken a leap forward,  not only can heat be generated at a lower cost,  the retention of heat is much better now with the advent of insulation.  When heat that is generated in your property it can be controlled by the installation of controls.  Innovative devices such as zone valves, room stats, time clocks and thermostatic radiator valves.

A thermostatic radiator valve; is a modern addition to temperature control, this valve can stop, slow down or isolate the flow of water to each radiator.  Thermostatic radiator valves add more energy efficiency to a heating system it can be used manually to shut off, or you can set the dial to a temperature of your choice.  Improvements and modern central technology are mainly aimed at energy efficiency to help a consumer cut costs on heating bills.

These devices not only offer control time but also a variance in temperatures giving the user a choice of where and when heat is required.  Central heating control via your is now possible by downloading an app to your mobile phone.  This app can be used to set the time and temperature of your boiler while your out.  This is a very useful addition to the standard heating controls; you can preheat your property to suit your arrival home from work.

A combination boiler is not suitable for every property

Central heating systems can vary depending on the size of the property, for example, a large house with two bathrooms may not be the ideal place to install a combination boiler.  This type of boiler can only provide either heating or hot water but not both at the same time.  Properties with a high demand for hot water may not be suitable for the installation of a combination boiler.

An unvented system would be a more suitable choice for a property with a high demand for hot water, a system like this as a cylinder that store’s hot water.  The hot water is delivered at mains pressure giving a better follow rate to deal with high demands.

Whatever type of heating system has been installed in your property it would have been designed to accommodate the demands of the household at the time.  Refurbishment can often require a reassessment of an existing heating system, with the addition of a new bathroom.  With the modernisation of a building not only will there be the structural changes but also the possibly of an increase in hot water and heating demands.

Maintenance is necessary; even the best-designed heat systems will at some point need to be repaired as a result of a central heating component failure.  However, if a system as been annually serviced as a requirement to validate a boilers warranty,  this will drastically reduce the possibility of a boiler breakdown.