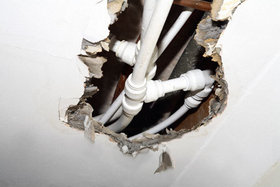 Burst pipes in walls – locations where concealed pipework can be found.

With the majority of older properties, it is a far easier task to avoid the possibility of burst pipes in walls. Older properties plumbing systems were built using conventional materials such as copper.  The copper pipe that is fitted is often wall mounted and clipped to hold them in place. For cosmetic purposes trunking or boxing may be used, this makes identifying concealed wall mounted pipework a straight forward task.   Older properties pipework tend to be concealed in places such as ceilings and under flooring where they can be found running through notches in rafters.

Changes in construction the early 2000s engineered joists or I-beams were used on New Builds for intermediate floor constructions. I-beam joists cannot be notched at the top, which is the traditional route through floors for copper pipe. Therefore threading flexible plastic systems through these joists is a much easier installation practice on site. Due to its flexibility low-cost corrosion resistance, a plastic pipe would be favoured as the primary material to be used on new builds.

Tips on how to avoid puncturing concealed pipework in walls and other locations.

How to avoid getting burst pipes in walls and concealed areas,  firstly before drilling or driving nails into walls,  its advisable to employ the use of a detector.  A detector can help to identify the possibility of dangers that may be hidden below a surface; a detector can be purchased for as little as  £29.00. New build properties plumbing tends to be constructed using plastic pipe; a detector can only recognise metallic materials such as a copper pipe or an electric cable. Pipework cover by a shallow layer of plaster fitted without adequate depth and protection can become susceptible.  In situations like this, it becomes very difficult to avoid the possibility of a burst pipe in a wall. Without the use of a detailed plan of a properties plumbing layout, an accidental puncture could occur by merely trying to hang a picture.

Avoid using power tools by drilling or cutting into walls or flooring without firstly carrying out a preliminary inspection. This can be done by using a detection device or by creating a pilot hole into surfaces such as fake plasterboard walls. However, before attempting preliminary inspection, you must be competent in dealing with situations such as this.

Pipework protected by a metallic sheet can drastically help to avoid the possibility of damage to the pipework, and also increases its visibility by making it then become detectable. A metal sheet which is used as a protective layer that can often be found covering electric cables in a wall, this kind of device can be used to protect pipework installed in a wall. A smaller sized pipe can easily be hidden a protective layer of metal. This method can become slightly more difficult when using larger pipe the bulking up the circumference area of the pipe, and the added protective layer can make concealing larger diameter pipes become more difficult.

It;s standard practice with a gas line installation below flooring to mark out the run of the gas pipe warning anyone working in the future that there is a gas supply below.  An outline drawing can drastically help to avoid any possibility of accidently punching the gas line.