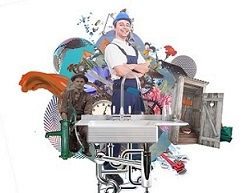 Modern plumbing makes what was once considered a luxury now a standard part of every home.

Long gone are the days of having to leave the warmth of your home to visit an outside toilet. The modernization of plumbing as made what was once considered a luxury a standard part of every home. An outside toilet would have been quite a commonplace during the late 1800s and even as recent as the 1970s. This may seem usual however in the past having the convenience of an internal toilet would have been considered a luxury.

Part of the original layout of an inner-city two up two down tersest house built in the late 1800s was a coal shed. This would be situated at the rear of the property in close proximity to that would be an outside toilet. Future installations such as gas fires would remove the need to store coal. This storage area in most home has been transformed into an internal toilet and bathroom. Evidence of this can be identified on close inspection of the brick formation from the old to the new.

Why some properties had built in toilets and others didn’t?

In the past the larger the property the higher the probability of it being built with an internal toilet. The reason for this is budget, luxurious homes built in suburban areas would be built with a toilet and bathroom. On entry to a property like this, there was a hallway usually accompany by stairs and a corridor leading to the kitchen at the rear of the building. This types of a house would be built with at least four bedrooms, quite pleasant surroundings with enough living space to cater for the possibility of servants.

Most of the smaller properties namely the back to back houses would have limited plumbing, sanitary consisted of communal outside toilets shared by the occupants. These houses were built to cope with the increasing population during the industrial revolution. The modernization of some plumbing in back to back houses would never happen. This was because these poorly ventilated and badly lit houses in some City’s like Birmingham would be demolished.

However, a small part of the history of these buildings still remain in Birmingham. They are no longer occupied by tenant’s, they are now visited by curious onlookers interested in taking a brief glimpse into the past.  The back to back museum located on Hurst street the have successfully restored a small number of these houses as an important part of Birmingham,s history.

Before central heating there was coal fires and paraffin heaters

Before central heating, there was coal fires and paraffin heaters. Unlike the central heating systems, we have now before accustomed to that incorporate the luxury of time temperature and heat distribution control. In the past maintaining an even temperature throughout a property was difficult. properties beyond the 80s were fitted with a coal fire. A coal fire can successfully heat a room however areas in the property without a chimney I,e a hallway, a bathroom or a kitchen would remain cold with the hope of residual heat spill over.

A paraffin heater is a mobile heating unit fuel by a flammable liquid called paraffin. In the past to refuel a paraffin heater this was either done by visiting a local hardware shop or by a delivery namely the paraffin man. A paraffin heater could deliver heat in places where there was no other source of heating.

Often referred to as a paraffin lamp this type of heater had a flame that could be observed through a side panel. Serving was none existent, there were numerous dangers associated with a paraffin heater such smell, highly flammable liquid, burns, illness due to poor ventilation as well as the possibility of carbon monoxide poisoning.

There have been health and safety improvements put in place to ensure that the dangers of previous paraffin heaters are no longer evident.  With the installation of safety devices to illuminate the possibility of burns and the fire if tipping over.  Although this type of heating was a common fixture in most homes, looking back now from a health and safety aspect there are numerous dangers associated with some of the previous models

The modernization of plumbing in Birmingham.

When the back to back houses in Birmingham was demolished there had to be somewhere to rehouse the occupant’s, hence the construction of the high raised tower blocks.

There was a change to the skyline in Birmingham during the 60s and early 70s, The high raised tower block would be the solution to the housing problem in the city. Fitted with a toilet and bathroom and a constant supply of hot water and cold running water, this was a vast improvement on the majority of properties in Birmingham. Depending on the year of the construction, some tower blocks were installed with electric wall heaters.

Due to the changes in health and safety regulations over the years Birmingham has undergone a Hugh redevelopment scheme which as enables the majority of tower blocks to have double glazing windows. As a result of this, there will be a long term reduction in the cost of heating making these properties far more energy efficient.

With the contribution of architects Builders and plumbers in Birmingham improvements  have been made over the last 5 decades.  This as unified the current standard of plumbing in every home impartial of the location or type of property people live in throughout the UK.

One thought on “The modernization of plumbing”