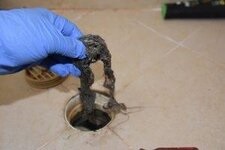 Common cause of a pipe blockage.

The question is often asked by a customer immediately after the removal of a blockage. What caused the blockage? Depending the type of plumbing fixture affected, the cause of a blockage can vary. A blocked bath or a wash-hand basin is usually caused by soap or hair. The pipe configurations can also contribute towards repeated episodes of blockage. Objects that are too big or do not dissolve will cause problems. A buildup of debris tapped in a bend will decrease the circumference of a pipe. And over a period, the restriction will worsen, eventually leading to a complete blockage.

To answer the question of what caused the blockage? Can often be simplified. By firstly eliminating the possibility of poor pipework installation. Pipe should be constructed in such a way as not to cause restriction. Susceptibility could lead to an ongoing problem of water backing up. A plumber’s repeated visits to remove a problematic blockage could be contributed to this.

Blockages can be put into two different categories. Localised or distant. Localised, meaning the blockage, is in proximity to the affected fixture. Or distant when a blockage is in the stack pipe at a distance away from the fixture. Whenever this happens, it is common to find the buildup of water effecting several fixtures. The severity of a blockage is escalated whenever all water outlets are backed up. A localized blockage is by far a lot easier problem to tackle than a blockage that is distant. A blocked up fixture such as a wash-hand basin can be stripped down. Then, and cleaned to remove the cause of the blockage.

.Overload can often cause a toilet blockage. The deposit of inappropriate material down the toilet pan will cause this. Whenever a load is exceeded, a sanitary waste pipe cannot cope with the amount of water and material deposited. The circumference of the connecting pipe at the rear of a toilet. Is by far the largest pipe you will find in most property. The reason for this is to remove a large amount of water in a short period. Despite this, an overload and toilet blockage will can still occur. Whenever the pipework diameter and capacity has been exceeded.

What is a trap? 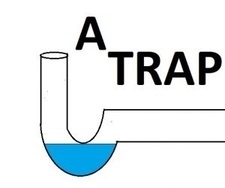 A trap can be found beneath a wash-hand basin kitchen sink or a bath and shower tray. The standard is white plastic moulded with a curvature in various sizes to accommodate the connecting pipe. A trap keeps a small amount of water that acts as a shield. This is in place to stop the foul spell entering a building. Within the contour of a toilet design, there is a trap. The trap is there to balance the equilibrium after each flush. A toilet built in trap keeps a small amount of water in the toilet bowel after being used.

What can be done to avoid a blockage?

Each plumbing fixture is susceptible to a restriction in flow, if not properly maintained. The cause of a blockage can vary. However, the outcome will always remain the same. When the movement of water finally comes to a standstill.

It is important to always stay within the parameter of correct use. Problems are far more likely to occur whenever inappropriate object entry a sanitary pipe. For example, wet whips do not devolve. Even when submerged beneath water, a wet whip will remain whole. And eventually restrict the flow, creating a blockage. A buildup oil and fragments of food are a common cause of a blocked kitchen sink. To avoid such issues, a strain can be placed over the plug hole. This will help to capture some fragments that would otherwise go down the plughole. Oil and fat can slog up a pipe when it solidifies. Substances such as this should be disposed of using an appropriate method.

To avoid a blockage at a wash-hand basin bath or a shower. The aim is to restrict the amount of hair and soap that goes down the plughole. A standard bath plug has circular holes that will capture objects that exceed a specific size. The buildup of fragments such as hair that does not dissolve will have to be manually removed. Rather than adding force and sending the obstruction further down, the pipework.

Depending on what caused the blockage? Will determine whether a chemical unblocker will work. If the treatment used does not shrink, dissolve or soften the obstructing material. Into a form where it is easy to wash away. You may not get the expected result. Before using a sanitary cleaning product, the instruction should be read carefully. This will instruct you on personal protection and how to best used to remove a blockage